The federal government keeps giving us plenty to talk about – and more help than we want or need.

New rules handed down by the Department of Housing and Urban Development (HUD) require homeless shelters to allow residents to use the facilities assigned to the gender they choose, as opposed to their biological gender.

I expect the rationale here is that some poor, weak, defenseless little transgender person will show up at a homeless shelter looking like a man, claim to be a woman and be humiliated by being asked to use the men’s toilet…or shower….or bedroom.

The rule doesn’t consider an equally likely scenario; a homeless woman fleeing an abusive husband seeks shelter and finds she has to shower with, well, a man who says he is a woman.

I don’t know how many homeless transgender people there are, but I expect there are more women fleeing abusive husbands or boyfriends than gender-confused people seeking shelter.

On a purely practical basis, the women ought to get first shot at being in a safe environment.  On a moral basis, we wouldn’t have this debate if we weren’t second-guessing God’s plan for human beings.

The federal government is creative.  Not to be outdone by HUD, the Department of Agriculture (USDA) is conducting summits for lesbian farmers as part of its “Rural Pride” campaign.  Really.  I’m not making this up.

Apparently there are young women who grow up on farms, discover they are lesbians, don’t feel welcome amid the corn, soybeans, cows and pigs and head off to a life of poverty and despair.  This leaves a bunch of Bible-clinging heterosexuals to get rich tilling the soil.

Frankly, there are lots of people who grow up on farms and decide not to stay.  They go off to the city to find their fortune and end up as everything from street sweepers to CEOs.  Maybe we should sponsor summits for brain surgeons, nurses, sea captains and professional basketball players who didn’t stay down on the farm.

Both my parents grew up on a farm.  Both left.  Neither was a lesbian.

Until this week, I never thought much about the sexual orientation of the people who grow the food I eat, let alone the pigs, cows and chickens that make the ultimate sacrifice to fill my tummy.  I really don’t object to lesbian farmers, but I can’t see spending tax dollars to promote them. 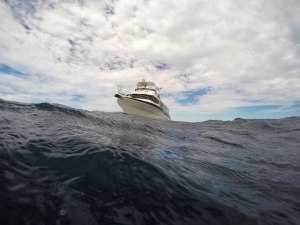 A multitude of watercraft ply the rivers and seas of the earth.  Some of those vessels have names, which range from the sublime to the ridiculous.

For our immediate purposes, I’m going to deal with only two categories of craft and how they are named.

The first is the naval warship.  These noble craft typically are named after a state, city, heroic character or word that might strike fear in the hearts of enemies.  These are names a sailor likely could relate to and utter with a bit of pride or attitude.  USS Abraham Lincoln.  USS Avenger.  USS Galaxy.  USS Phantom.  USS Thrasher.  USS Viper.

The second category is the pleasure craft.  In most cases these are boats rather than ships.  And they have names given by their owners that suggest that the owner is, well, having fun.  The names are clever and raise a chuckle:  Lobster Mobster.  The Grateful Dad.  Idiots Delight.  Beeracuda.  Reel Busy.  Diesel Dude.

It is vital, when naming a craft, not to confuse these two categories.  You wouldn’t want to face the Russian Navy in a ship called Mr. Tip-sea.  And you wouldn’t want to go out fishing with your friends in a 20-foot boat called USS Theodore Roosevelt.

Unfortunately, Navy Secretary Ray Mabus seems to have become a bit confused on how to appropriately name a Navy ship and has decided to name one of our fleet after Harvey Milk.

Milk was a well-know gay activist in San Francisco.  He was known to stretch the truth and to have a tendency to being overly affectionate with boys.  Much of his iconic status in the gay community resulted from his murder by Dan White, a fellow member of the San Francisco Board of Supervisors.  (At least in Chicago our aldermen don’t shoot each other – they just bribe each other.)

I’ll admit that Milk attained a certain notoriety.  I just can’t fathom his name on a ship full of sailors.  Maybe on a bath house or alternative school of some sort.

I suggest the Navy Secretary go to the Pentagon’s record center and get a list of seafaring souls who have lost their lives in the line of duty.  Name the ship after one of them.  Any would be a better choice the Milk.

Millions of women have had abortion – some more than one.

This isn’t a happy fact.  It is sad, horrible, sinful.  But rather than condemn these women (and the men who were part of their story), we are called to forgive.  There is no human failing that God cannot heal.  And we must ask him to help us show mercy.

Keeping all that in mind, there are pro-abortion groups that sorely test my mercifulness.  Recently moving to the top of my list of dark forces is “We Testify.”

The group sells clothing for women with bold slogans like, “I had an abortion.”  And for men, tank tops that say, “I fund abortion.”

This rather shameless group encourages women who have had abortion to tell their stories.  In my blunt terms, they want the women to brag about their abortions.  They describe what there are about:

Every day someone chooses to have an abortion. We are not alone in this decision, however, due to stigma, we’re often made to feel isolated and shamed. Our stories remind us and those around us that we’re not alone. We testify as experts to our experiences. We testify that our spirituality and abortion are one. We testify on behalf of our communities and others who’ve had abortions across the country. When we speak out and share our stories, we demand to be counted

I have a difficult time putting abortion and spirituality in the same breath. There isn’t anything spiritual about having an abortion – but I hope there will be spiritual help for those who have had abortions and want to recover.  They have arrived at a moment that needs pity, not pride.

We Testify won’t heal the hurting; it will simply delay the time when the suffering are willing to experience real healing.

Pope Francis hit a raw nerve among transgender advocates this week by suggesting that children should not be taught that they can select their gender.

I expect some readers will read that opening sentence a couple times; I don’t know how to more clearly explain the conflict.  But that won’t stop me from trying…

There are folks in the lesbian-gay-bisexual-transgender community who believe children need to be educated in gender theory so they can knowledgably decide what gender they are.  The Pope suggests this is a terrible idea and he supports the Catholic idea that God created man and woman and it is God’s decision which gender each of us will be.

To the LGBT crowd, this is insensitive and hurtful.  They – like many in today’s permissive culture – can’t grasp the idea that the Pope can express love and mercy to ANYONE while not approving of their behavior.  He is famous for going to jails on Easter Thursday and washing the feet of people convicted of horrible crimes.  It is an expression of love for those persons, not approval of their bad deeds.

On a more practical level, teaching young children about sexual options that are contrary to God’s plan isn’t just morally questionable, but a violation of common sense.  Having actually raised a couple children, I believe I have some insight.

There are many decisions parents must make for their children to prevent them from hurting themselves:

These being practical realities, do anything think it is a sane idea to have little kids being lectured on various gender options and deciding for themselves whether to be a boy, girl or combination or both?