I’m one of the 100 million or so Americans who watched the presidential debate last night.

Like other students of history, I had no illusion that I was watching the Lincoln-Douglas debates.  It was more like two kids on a playground dissing each other’s family backgrounds.

But in a little more than a month, I will cast a vote for President and I hope you will as well.  It is vital to cast a vote for someone who has a chance to win and best reflects Catholic values.

In saying this, I am fully aware that neither candidate is in any way or manner a paragon of Catholic values.  But we have a responsibility to vote for the one who is closest, or perhaps in this case, is the least objectionable.

Staying home or writing in Bishop Sheen is a cop out – a sin of omission in my book.  You have to take a viable stand.

Don’t worry; I’m not going to attempt to tell you the particular person to vote for.  However, here are some questions to ask yourself before voting; some require doing a little homework.

I believe these are the important questions.  They merit prayerful, thoughtful consideration.

We are looking at two major candidates with many human flaws.  But don’t let that distract from the fact that they have exceedingly different views of the world and would take us in very different directions.

Catholic will decide the winner of this election.  How we decide may determine whether we can continue to be free to practice our faith.

Despite the old joke I tell my kids, I really didn’t walk 25 miles to school in the school, uphill both ways.  I either lived with a mile of school – or took the school bus.

Taking the bus wasn’t a thrill, but at least I spent the time waiting with a couple good friends in the neighborhood.  We talked sports, books, television and, occasionally, homework.  The important thing is that we actually talked to each other.

A few days ago, I was driving to grandma’s house in the morning and found myself following a school bus along its route, which meant stopping every few blocks while the bus loaded its students.  I’m guessing the bus was bound for a junior high school because the kids were too big to be cute munchkins and too small to be pretend-adult high schoolers.

But unlike my buddies and me a few decades ago, they were not talking to each other.  Every stop had a small crowd of kids looking at their cell phones.  Most were pecking at the phones, either texting or playing games.

In passing three stops I didn’t see any kid actually talking to another kid.  There were a couple who didn’t have phones – they were pecking at iPads (or some similar tablet).

And there were a couple kids who were just standing around looking lonely and bored, apparently the product of technology-resistant parents who thought they should interact with real live humans.  Of course, they would have to find one who wasn’t glued to a screen.

Technology mavens probably think what I just described is a sign of progress, of the beautiful interconnectedness of humanity.  Those adolescents may be connecting with like-minded souls around the world, sharing brilliant insights and inspiring thoughts.

More likely, they are trying to break their records at Angry Birds.

These bus-stop scenes seemed unnatural to me.  The kids were mesmerized by their devices, seemed almost to revere them.

An idle activity had become more like idol worship.

This led me to a silly fantasy – that all these kids were reading the daily missal on their smart phones, or perhaps a book by Pope Francis.  I know, what a crazy thought.  But I’m going to be watching for a kid holding a rosary instead of a phone and praying he sets a trend. 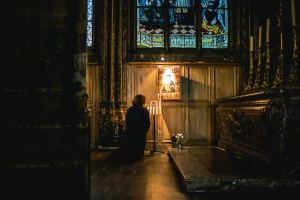 She was one of those little old ladies you see often in our parish:  kneeling, praying the rosary, lace head covering, a look of quiet piety.  Ah, what a devout Catholic.

Mass had started, but I was still in the confessional.  When I finished, Father told he if anyone else was waiting, tell them to come back after Mass; he needed to stop during the service.

I opened the door and found myself face-to-face with the aforementioned little old lady.  I whispered to her Father’s directive, expecting a knowing nod in return.  Instead, she muttered that Father was a jerk, an inconsiderate and worthless priest.

I admit my image of this lady changed a bit.  It became difficult for me to see her as a devout Catholic.

This happened several years ago, but came to mind in recent days as various people professed to be “devout Catholics” in the context of supporting abortion, gay marriage, kindergarten sex education, transgendered bathroom choice or whatever.  It got me to wondering what constitutes “devout” with regard to Catholicism.

Devout likely is in the eyes of the beholder.  And there are many characteristics that might make a person appear devout:

Some politicians support abortion, claiming their Catholic faith says they should care about poor women who need to be freed of the burden of a baby.

Some politicians support same-sex marriage, claiming their Catholic faith calls on them to be compassionate to those with an alternative view of God’s plan for marriage.

And of course is the infamous:  I’m personally opposed to XXXX but won’t impose my moral judgements on others.  This usually is applied to abortion, but what about a host of others evils prowling the world these days – slavery, honor killings, religious persecution?

At minimum, a devout Catholic would try hard to live a Christian life, follow the teachings of the Church and make sure those teachings inform every decision he makes.  This is especially important for politicians, because laws really are derived from moral beliefs.

I can’t imagine ever calling myself devout.  My reality is too far from the ideal

Perhaps I am a practicing Catholic, but only if I concede I’m a Catholic who needs much more practice in his faith.

Let me start by admitting that I’m not an expert on female fashions.  My wife is quite fashionable, but she would look good to me in a burlap bag.  The reality is that I don’t know the names of famous designers or what to call various categories of feminine attire.

So it should come as no surprise that until very recently I had never heard of a burkini.  Maybe you haven’t either.  But if you have wandered over the front page of most major newspapers in recent days, you know that the burkini has become an item of controversy in some beach resorts.

This seems to be quite the issue in France, which really comes as no surprise to me.  The French seem like folks who would get upset by people wearing too many clothes at the beach.

You see, the burkini is a bathing suit worn by Muslim women.  It looks to be a combination hoodie-scarf-wetsuit-sweatshirt. It pretty much covers the entire female body, which is something dramatically different than traditional French beachwear.

I’ve tried to fathom why some French want the burkini banned, but apparently they believe it violates their culture.  One beach-resort mayor said Muslim women should adapt to French ways.

Now don’t get me wrong.  There are lots of things about Muslim culture that worry me.  Sharia Law has no place in a Christian nation (which I still think we have).  I don’t think husbands should treat their wives like slaves, let alone have more than one at a time.

But wearing too many clothes at the beach just doesn’t seem like a threat to civilization.  Nuns have been known to walk the shoreline in their habits.  Surfers wear body suits in cool weather.  James Bond has jumped into the water in a tuxedo a couple times.

I can’t ever remember my grandmother wearing a swimsuit, but I’m pretty sure if she had it would have covered pretty much all of her.  She was a Methodist, not a Muslim.