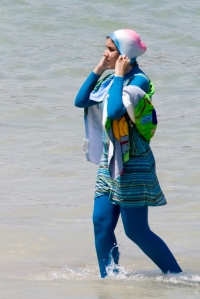 Let me start by admitting that I’m not an expert on female fashions.  My wife is quite fashionable, but she would look good to me in a burlap bag.  The reality is that I don’t know the names of famous designers or what to call various categories of feminine attire.

So it should come as no surprise that until very recently I had never heard of a burkini.  Maybe you haven’t either.  But if you have wandered over the front page of most major newspapers in recent days, you know that the burkini has become an item of controversy in some beach resorts.

This seems to be quite the issue in France, which really comes as no surprise to me.  The French seem like folks who would get upset by people wearing too many clothes at the beach.

You see, the burkini is a bathing suit worn by Muslim women.  It looks to be a combination hoodie-scarf-wetsuit-sweatshirt. It pretty much covers the entire female body, which is something dramatically different than traditional French beachwear.

I’ve tried to fathom why some French want the burkini banned, but apparently they believe it violates their culture.  One beach-resort mayor said Muslim women should adapt to French ways.

Now don’t get me wrong.  There are lots of things about Muslim culture that worry me.  Sharia Law has no place in a Christian nation (which I still think we have).  I don’t think husbands should treat their wives like slaves, let alone have more than one at a time.

But wearing too many clothes at the beach just doesn’t seem like a threat to civilization.  Nuns have been known to walk the shoreline in their habits.  Surfers wear body suits in cool weather.  James Bond has jumped into the water in a tuxedo a couple times.

I can’t ever remember my grandmother wearing a swimsuit, but I’m pretty sure if she had it would have covered pretty much all of her.  She was a Methodist, not a Muslim.