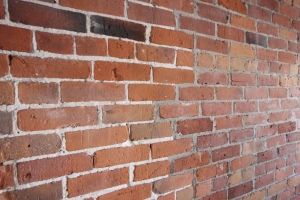 Important disclosure:  I’m a Roman Catholic and a registered Republican.

I’m a bit uncomfortable about the Pope Francis vs. Donald Trump exchange of apparent insults.  It isn’t that I expect political and spiritual leaders to agree with each other about everything, but I do expect a certain level of basic respect.  We have lost the ability to have a calm discussion about a serious subject.

This isn’t the first debate between a Catholic leader and a land developer.  In one of my favorite movies, The Bells of St. Mary’s, Sr. Mary Benedict (played by Ingrid Bergman) heads a parish school beset by financial troubles.  The school building suffers from a world-class case of deferred maintenance.

The solution to the school’s many challenges appears to be right next door: a beautiful new facility built by businessman Horace P. Bogardus (played by Henry Travers).  Sister just needs to explain to Horace that it is God’s will for him to give her the building.

Some interesting discussion ensues, but none of it devolves to the level of the current debate.  In fact, there is much demonstration of faith, love and charity.  (If you want to know what happens, you gotta watch the movie.)

Of course, that was just a movie.  And the spat between the Holy Father and The Donald is real (I think).  The contentious concept is that Christians don’t build walls.

But this isn’t about a wall.  And I believe if you locked Pope Francis and Donald Trump in a room for a couple hours they would emerge laughing, arm-in-arm.  This debate, like so many today, is less about where we want to go than how we want to get there.

I’m willing to stipulate that both the Holy Father and Donald Trump want the world to be safe and prosperous.  Everyone should have food, clean water, a decent place to live and the ability to practice their faith without being beheaded.  It would be nice to have challenging, creative, rewarding work to do.

These two men might take a different path to get there, which offers nothing new in the arena of ideas.  Free enterprise vs. socialism.  Democracy vs. centralized planning.  Individual vs. collective.  Low taxes vs. high taxes.  (Another disclaimer:  I support the first of each of these pairs.)

We need a little clarification…

When Trump says he’ll build a wall, I think he is expressing his frustration that America’s borders are being overrun and we don’t know how to deal with the situation.  Our system is broken and needs fixing.  I don’t think he wants women and children starving in the shadow of a menacing wall.

When Pope Francis says it isn’t Christian to build a wall, I think he is expressing concern for the poor and the immigrants who need help.  He wants the two countries on either side of the border to get together and act like Christian adults and fix this.  I don’t think he wants to confiscate the private property of every working Mexican and American.

I had a boss years ago who took over our department.  He had several people reporting to him and we direct reports didn’t always agree with one another.  So early in the new guy’s tenure he told us something a bit startling:  if two of you have a disagreement and come to me to decide who is right, I’ll assume you are both wrong.

Immigration has spawned a huge disagreement between Pope Francis and Donald Trump, between Mexico and the United States.  We all have a common boss, God.  And if we don’t find a way forward I fear he’ll assume we’ll all wrong.

Way back in the middle of the 20th century, I went to public school.

We had events that I remember being called “debates.”  There would be some proposition, say, “the voting age should be lowered to 18.”  (Yes, I’m old enough to have lived when the age requirement was 21 – but the issue of women having the vote had long been resolved.)

The debate would have two teams, one for the proposition and one against.  One side would speak, then the other.  There were rebuttals and the use of many index cards and a copy of the rules ever handy.

I always thought what I have just described was called a debate.  But I’ve watched several television events called debates – and they aren’t anything like what I remember.  These current events remind me of what sometimes occurred on the playground at recess.  It was a spirited conversation, usually between two young male students, that went something like this:

You are a dirty, rotten liar.

Am not…you are the dirtiest liar in the whole school.

You take that back or I’ll punch you.

You punch me and my big brother will whoop you.

Your brother touches, me my dad with beat him up.

Yeah?  Well…my dad is bigger than your dad.

The discussion could go on for several minutes, sometimes devolving to a physical altercation.  This rarely resulted in any real physical damage to the participants, although I expect there are thousands of psychologists who have made a good living sorting out the resulting mental trauma to fragile young male minds.

I never thought of these playground events as “debates.”  I thought they were just a couple young guys acting like jerks.  They usually were the sort of guys who would make a younger boy put his tongue on a light pole in the dead of winter and laugh when it stuck to the metal.

If I had to give them a formal name it would be something like “spat” or “scuffle.”

So…when I tuned into the “debates” I thought I was watching a scuffle, with a bunch of guys (and an occasional gal) acting like jerks.  I guess these people are running for President of the United States and believe the best way to get elected is to call the other candidates liars, cheats, dummies or Canadians.  (Frankly, I always thought it was a compliment to be called Canadian – but perhaps that’s because I’m a fan of the frequent-of-late-Stanley-Cup-Champion Chicago Blackhawks.  We have lots of wonderful Canadians on our team.)

Maybe my apparent misunderstanding of these terms is just another case of the confusion inherent in the English language.

For example, “forensics” is the study of “reasoned discourse: argument.”  A debate team often is called a forensics team.  But “forensics” also is a criminal science.  Forensic scientists investigate crime scenes and are often portrayed on television shows analyzing DNA samples and tiny hairs left behind by doers of dastardly deeds.

I think the folks on the televised “debates” relate to both definitions of “forensic.”  They engage in argument, though sometimes poorly reasoned.  And they seem to be in the midst of a crime scene, the crime being the murder of the American political process.

Maybe we’d be better off with their tongues stuck on a cold pole.

Some students at the University of Oregon don’t like this quote, which is displayed at their student union.  They are so limited in their vision of political correctness.

By the way, if you don’t know what a student union is, it is a place on a university campus where students hang out and ponder the important issues of the day:  what’s for lunch, what bands are playing in the local bars, boxers or briefs.

Students also engage in conversations to make sure they are achieving a sufficiently high level of political correctness.  Thus, the Oregon students want this famous quote removed because it is too narrow – it doesn’t refer to gender identity. It seems King should have mentioned the rights, dreams and aspirations of the transgendered.  Perhaps King would still be respected on the Oregon campus if he had said:

I have a dream that my four little children will one day live in a nation where they will not be judged by the color of their skin or which gender they identify with on Tuesday, but by the content of their character and their willingness to share a toilet with anyone of any gender.

Sadly, adding the rights of the transgendered to King’s dream hardly gets you to politically correct pre-eminence.  What about the rights of Druids?  What about people who have an extra little finger on their left hand?  What about vegetarians and folks on the paleo diet?

I read last week about a young woman who identifies as a cat.  She says she is trans species.  Who is looking out for her right?  Maybe not the students at Oregon, which has the team name “Ducks.”  Ducks don’t like cats.

Then there are fat people, skinny, tall people, short people and people who are just too average in build and stature.

The sad fact is that the walls of the student union at Oregon probably aren’t tall and wide enough to display all the categories what must be cared for.

But if the students could actually read what King said, they will realize that nobody is excluded.  Every human – male, female or undetermined – has a particular color to their skin.  And they should not be judged by that color but by the content of their character.

Doesn’t anyone really want to argue with that?