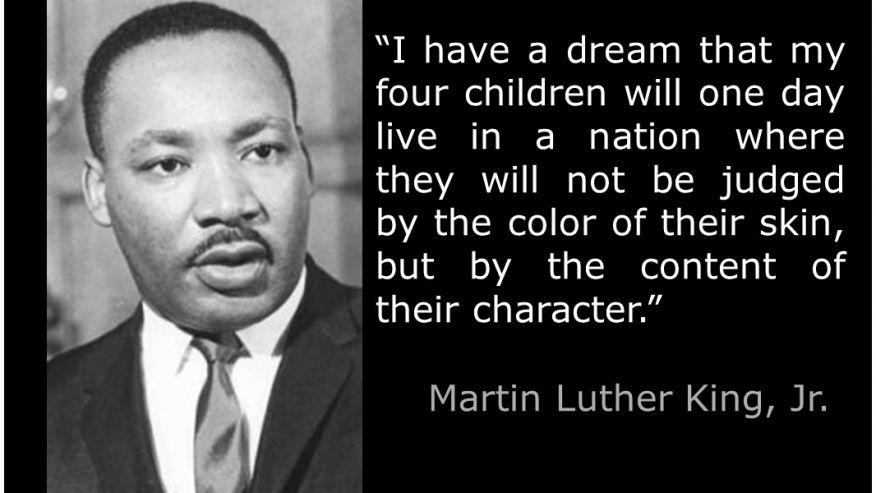 Some students at the University of Oregon don’t like this quote, which is displayed at their student union.  They are so limited in their vision of political correctness.

By the way, if you don’t know what a student union is, it is a place on a university campus where students hang out and ponder the important issues of the day:  what’s for lunch, what bands are playing in the local bars, boxers or briefs.

Students also engage in conversations to make sure they are achieving a sufficiently high level of political correctness.  Thus, the Oregon students want this famous quote removed because it is too narrow – it doesn’t refer to gender identity. It seems King should have mentioned the rights, dreams and aspirations of the transgendered.  Perhaps King would still be respected on the Oregon campus if he had said:

I have a dream that my four little children will one day live in a nation where they will not be judged by the color of their skin or which gender they identify with on Tuesday, but by the content of their character and their willingness to share a toilet with anyone of any gender.

Sadly, adding the rights of the transgendered to King’s dream hardly gets you to politically correct pre-eminence.  What about the rights of Druids?  What about people who have an extra little finger on their left hand?  What about vegetarians and folks on the paleo diet?

I read last week about a young woman who identifies as a cat.  She says she is trans species.  Who is looking out for her right?  Maybe not the students at Oregon, which has the team name “Ducks.”  Ducks don’t like cats.

Then there are fat people, skinny, tall people, short people and people who are just too average in build and stature.

The sad fact is that the walls of the student union at Oregon probably aren’t tall and wide enough to display all the categories what must be cared for.

But if the students could actually read what King said, they will realize that nobody is excluded.  Every human – male, female or undetermined – has a particular color to their skin.  And they should not be judged by that color but by the content of their character.

Doesn’t anyone really want to argue with that?