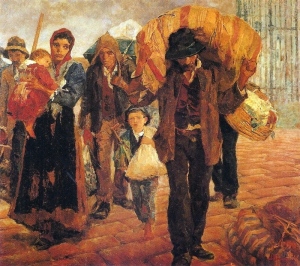 I’m blessed to live in a country that people want to get into rather than out of:  The United States of America.

In the past few weeks, three of my friends became American citizens.  One from Mexico, one from Australia, one from South Africa.

Despite their different national backgrounds, they have much in common.  All are beautiful people of deep faith, hard-working, dedicated and honest as the day is long.  I’m grateful that they now are Americans because their addition enriches our nation’s character.

These three friends went through the long, complicated, legal process to become citizens.  The process isn’t easy to understand or navigate.  In talking with people in various stages of attaining their citizenship, it reminds me of booking a ticket on an airline.  The price is different on Mondays than on Tuesdays, tickets are cheaper if bought before 9 a.m. or after 3 p.m., you can use your frequent-flyer miles every fourth Thursday and you get a bag of peanuts if you sit in an aisle seat in an even-numbered row.

I’m a reasonably bright guy with a couple college degrees and I can’t make sense of our immigration system.  In this inspiring political season I have read many proposals for “fixing” the system.  They range from putting up a titanium wall on our borders with armed guards every six feet to just letting people wander in and make themselves at home collecting government benefits.

Somewhere in between those extremes is a place that practical people of Christian faith can stake out as right and reasonable.  That place recognizes our moral obligation to help people in need, combined with the practical reality that we can’t do that if we aren’t economically viable.  If we don’t find that place, we have failed in our duty as Christians.  And the immigration problem will go away; we’ll lose our ability to offer the American Dream and people will stop trying to get in.

I want to live in a country that other people admire and have a clear, fair path to join.