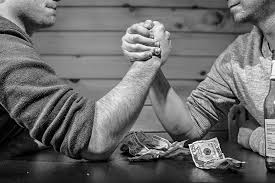 In a couple days, Pope Francis and Donald Trump will meet face to face, person to person, two heavyweight approaching the center ring of international diplomacy.

I have been reading the advance predictions about what they will discuss and whether there will be sparks.  From what some writers suggest, this could be a titanic, awkward clash of irreconcilable differences.

Of course, the news media depend on conflict, so it won’t be much of a story if Francis and Trump get together, swap recipes, and tell family stories.  The press wants blood, and given the history of these two men, they have some reason to expect it.

The assumption is that these two giants of the international stage have little to nothing in common – but I dare to disagree.  Some examples:

Francis worries about global warming and Trump is a skeptic.  But both want the earth of prosper and people to have enough food and shelter.

Trump wants to build a wall and Francis favors bridges.  But both want a workable immigration system that helps those in need and recognizes the sovereignty of nations.

At the risk of sounding like a beauty pageant participant, I believe both men want world piece, although they likely won’t agree on the steps to get there.

There won’t be fisticuffs, mud wrestling or foul language.  There will be a search for common ground and an effort to build a foundation for collaboration.

I have a sense they could become friends.