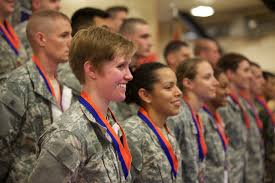 I never served in the military.  So, it is possible I have this all wrong.  But I doubt it.

My late father and late father-in-law both served, as did several of my other relatives.  In conversations with them, paying attention to the news and watching probably every movie John Wayne ever made, I got the impression the military isn’t the place for social experimentation.

The military experiments, but more along the lines of how to keep its members safe and eliminate the enemy most effectively.  Sorting out issues related to human sexuality shouldn’t be a priority for people getting prepared for war.

Thus, I was a bit dismayed last week when I read news articles about life in the US Army.  (Kudos for Lifesite for reporting.)

First, it seems the Army has informed its female soldiers that they should show dignity and respect for transgender soldier who are in the process of transitioning from male to female.  These transitioning folk will be using the female barracks and showers even though they are still anatomically male.

In other words, if you are a female soldier and you encounter someone with a penis in your showers, don’t worry; they aren’t really a guy, but an uncompleted woman.

I’m not sure (nor do I want to speculate on this too much) how you know the difference between a transitioning person and a guy who just decided to ogle the women in the bath, but the situation must lead to some interesting conversations for military recruiters…

SARGEANT RECRUITER:  So, tell me about yourself.

AMORPHOUS RECRUIT:  Well, I’m called William Smith on my birth certificate.  Most of my life, people have called me Bill.  But in the past couple years I have started to sense that I should have been Gertrude.  So, my close friends now call me Gert.

SARGE:  That is really interesting.  As you know, the military is open to people of all gender persuasions. Would you like to be assigned to male or female quarters?

SARGE:  I hope it doesn’t seem unsympathetic or in any way, threatening to your fluid personhood, but you do have to select one.  However, the Army will do everything to make you feel comfortable and if you decide to be a man now and decide later you would rather be a woman, we’ll pay for whatever treatments and surgeries are involved.

I probably should have mentioned this earlier; the military pays for its members to have sex-change operations. That means we are paying for the operations.  And I don’t think this is a wise investment in the defense of our nation.

You don’t have to be a genius or have won an Olympic medal to join the Army.  But there are entrance exams and fitness tests.  Not everyone gets in.  And if it were up to me, recruits would have to be a demonstrable member of one gender, without the option of changing later on.

The Army isn’t the place to work out sexual identity.