My heritage is enriched by various cultures and nationalities.  In other words, I’m an American mutt.

Lots of German, some Dutch, perhaps a little English and, possibly, a tiny bit of Irish.

I married a beautiful woman of 100 percent Italian heritage.  I quickly accepted that as result, my son and daughter always told folks they were Italian.  I can’t blame them; their mom was sure where her ancestors came from and I had plenty of doubts about mine.

Well, this week we celebrate St. Patrick’s Day.  I’ve learned it isn’t that big a deal in Ireland, but it is a huge event in the United States, where millions of people of Irish ancestry live and take comfort in being part of the Irish Diaspora.

I always thought it would be fun to be Irish, but didn’t feel comfortable claiming membership in the Gaelic club.  (However, I have noticed that many people with absolutely no clear genetic link to Ireland decide they are Irish on March 17 each year.) This year is different for me.  And while I may be claiming a right I don’t really deserve, as far as I’m concerned I have become at least part Irish by association.

The association is with a remarkable young woman, Karen Brady.  She is smart, clever, thoughtful, athletic, musically gifted and beautiful. 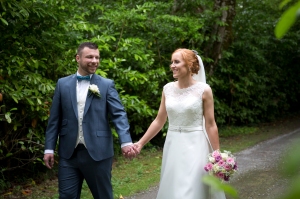 When it became clear a couple years ago that my son was on a path that would lead him to marriage in Ireland (and likely permanent residence there), I have to admit to moments of, well, regret.  After all, there are at least a million marriage-eligible young women within 100 miles of our home near Chicago.  Couldn’t he find one who might keep him closer to me?

But there isn’t a Karen Brady anywhere else than where this one is:  Tullamore, Ireland.  And there isn’t a couple who more belong to each other and with each other.  My son chose with a wise heart.  She is worth crossing an ocean to join.

Thank you Karen, for the wonderful person you are.  I hope you don’t mind me crashing your club, but I figure that should be a benefit to any man with a perfect Irish daughter-in-law.